Wow, that was funny boy!
Together with my band members Fare we had a gig in the opera of Hanover. What a great thing to do.
We were told that it would be up to 400 people so we packed our stuff and got ready. 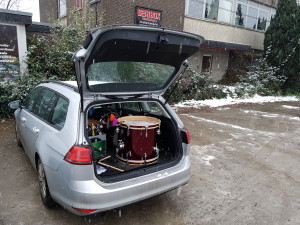 I have to say that this location was soo amazing. It was behind the scenes so to speak.
Absolutely Fantastic. Normally you sit in the crowd an see a play on stage but beeing backstage… It was a room with a height up to 50 m and the same below the floor. crazy!
While carryieng our stuff inside the room people yelled at me with a finger leveled at my head. At first I tought they admired my chicago bulls hat which I found quite cool but than I was told that it was an absolut No Go to wear a hat on stage(inside a theatre). It is about superstition. Actress and actors are afraid that people might leave in the first break putting their hats on to go outside. Alrighty, thanks for that learning… Another thing is whistle. In the old days pipelines and tubes whistled when they were about to break so NO whistle on stage please. 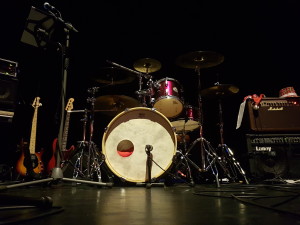 I just wanted to see Murphys limit so I took a black cat and walked on broken glas under a ladder to see if Murphy would appear but he didn´t. At least no yet.

The coolest part for us as a band was of course the qualitiy of the sound on and off the stage. Light was also an important factor but the most impressiv part was that they hightend the stage up to one meter. That was so cool to play up their. 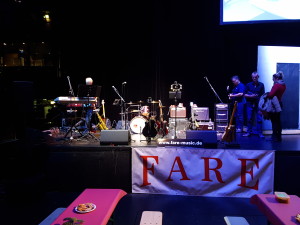 At 18:30 we started our gig with our first set of ten songs… and it was followed by the next set of ten songs… but for some reason…it wasn´t so much fun. In other words I was a little frustrated. At first I thought it was our playing that we might suck tonight and played like a horde of morons. After every single song there was brief applause and thats it. No cheering or yelling or dancing or singing along… nothing. Then we realized that the people down there haven´t seen each other in a long time and they were so much into interacting with one another rather than partying with us – Thats an odd feeling, dude!

Over the last months I mastered playing with click like in every song. I got a metronom app on my smartphone and connect it via my bluetooth headphones and I played a song…suddenly the click stoped in my headphones and I got a call which also rings in my headphones in the middle of a song. My parents just wanted to say good luck for the gig I now know… what a timing. Still that wasn´t Murphy that was just.. funny.
The next song was Brian Adams with when youre gone. I counted in… click click click click and normally I would hit a crash cymbal + bass drum but the bass drum wasn´t… available so to speak. It was a feeling like getting stolen by the throttle while driving on the street.

I check the bassdrum and found this. 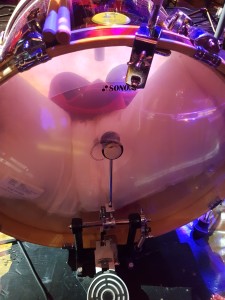 I continued playing with no bass drum kicks at all and to my surprise it seemed that it had not bothered anyone. For me as a drummer the most important part at a drum rack was missing!
After the song with pretty much no time in between the next song kicks in. Four non blondes – whats going on. What a perfect timing because it was the song which sounds nearly as a good to play with or without drums at all. I immediately fixed the hole and changed the position of the kick pedal to finish the gig at least with some kind of drum kick. 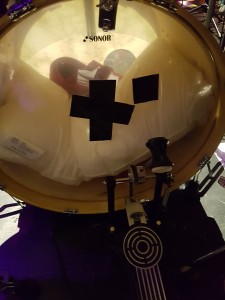 kind of a fix up…

To our all sakes while playing our third set songs from pink to kings of leon the crowd now started to dance and sing along. Finally even we got some fun and ended the performance with a hot finale.

What did I learn this day?

No hats on stage